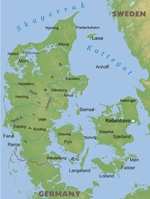 Red Spider, the Remote Open Close Technology (ROCT) specialist delivering multi-million pound savings and reduced risk to the oil and gas industry by eliminating interventions during well operations, has completed one of its largest deals in the Scandinavian market to supply its ground-breaking tools to Hess.

Red Spider AS, the Norwegian-based division of the Aberdeen-headquartered company, signed an agreement to supply multiple eREDs for deployment scheduled to start later this year on the DONG Energy rig in the Hess South Arne field in Denmark.

eRED, Red Spider’s first tool to use its patented ROCT for remotely operating downhole valves, has completed over 100 operations with more than 20 operators and over a quarter of the jobs have been carried out in the Norwegian sectors of the North Sea. The technology is on its way to becoming the industry standard solution for various downhole applications.

The Hess South Arne scope of work includes deployment of a shrouded eRED application in the lower completion to provide a fully independent remote method of isolating the flow path in the liner. This will allow the setting of packers and operating of other hydraulically operated tools in the completion.