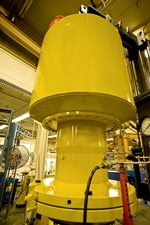 The large subsea actuator helps to expand the gas distribution network on the Caribbean nation of Trinidad and Tobago. It weighs in at 9M/T and ties in to the existing 91cm diameter pipework.

The National Gas Company of Trinidad and Tobago Limited is using the largest Dantorque actuator ever produced by Emerson to help expand its gas distribution network on the Caribbean nation of Trinidad and Tobago. The actuator, which is 2.4m tall and 1.64m in diameter, will be used to isolate the gas being supplied from Trinidad’s northern offshore gas fields in the event of an emergency situation.

The multi-million dollar project covers a range of valve automation products from Emerson, including a Dantorque subsea gear operator and one smaller spring return actuator, three Shafer subsea actuators and 11 Shafer gas-over-oil actuators installed on the offshore-platform and land portions of the pipeline.

The development of new gas fields off the northeast shores of Trinidad required new pipelines to be connected to the existing pipeline infrastructure, which is all in the south. The tie-in to the large 91cm diameter existing pipeline required a spring return actuator with ROV (Remote Operated Vehicle) override capability. To meet this requirement, Emerson supplied a DTUS 171/1350 Dantorque actuator which has a spring ending torque of 102,500Nm and weighs 9M/T.

The Dantorque DTUS actuator converts the linear motion of a spring into rotation through helical spline gearing technology. The mechanical spring return package is based on the Belleville (disc) spring principle, which is well proven.