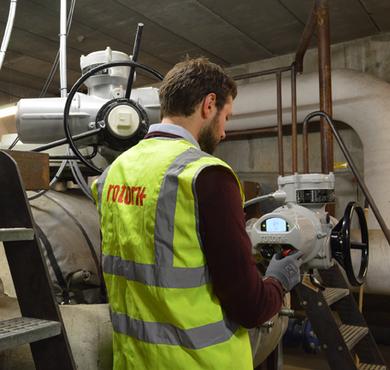 The Metropolitan Copenhagen Heating Transmission Company (CTR) has selected Rotork IQ3 valve actuators to replace actuators from another manufacturer that have suffered permanent damage from the effects of hot water.

A problem in an adjacent area recently caused a remotely controlled underground valve chamber to be flooded with near-boiling water. Although the problem was quickly rectified, all the electric valve actuators installed in the chamber had been completely submerged in the water. Subsequent inspection revealed that the robust double-sealed design of the installed Rotork IQ actuators had protected them from any damage and maintained the integrity of their standard IP68 temporarily submersible enclosure specification. By comparison, the actuators from the other manufacturer had been badly damaged by the effects of the hot water reaching internal electric and electronic components.

Following a thorough precautionary inspection in the workshops of Gustaf Fagerberg A/S, Rotork’s agent in Denmark, the Rotork actuators were re-installed and put back into service. In the meantime, replacements for the badly damaged actuators were required as soon as possible to minimise potential disruption to routine operations, but integration with the centralised control system demanded the inclusion of special interlocks in each new actuator in order to ensure the correct operational sequence of main and bypass valves.

In the valve chamber, the design of the Rotork actuators had proved to be superior by protecting them from the damage that was inflicted on the other actuators. Working with Fagerberg engineers, Rotork produced a wiring diagram with customised interlocks to suit the application and confirmed that new IQ3 actuators meeting this specification could be delivered in less than four weeks. CTR therefore agreed to place an order for the Rotork actuators.

The site wiring interface with the old actuators utilised plug-and-socket connections. In order to retain these, separate plug-and-socket housings have been installed, locally sited by each new actuator and connected to the actuator terminal compartment. As well as retaining the double-sealed environmental integrity of the Rotork IQ3 actuator design, the plug and socket connectors have also enabled the actuators to be retrofitted with minimal modification to site wiring.