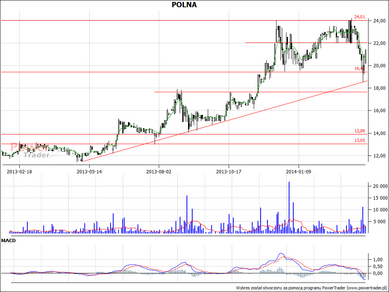 Through the kindness of the editors of FinWeb.pl portal, we present here the full text of the article "Zakłady w dobrej formie" ("Good condition of POLNA"):

"We are going to look at the results of "Polna" for the last year, disclosed in the company's report for this period, which has just been issued.

We are actually interested in the comparison of the disclosed amounts with the results achieved in the previous years. When we analyzed Polna in February, we only knew the results for the first three quarters of 2013. They were quite good: the company had achieved profits, maintaining the profitability ratios at nearly the same level as in the respective period of the previous year (e.g. over 10% EBIT margin).

What is noteworthy is the fact that in four years (2009 – 2012), the revenues were at a lower level than in 2008. The last year, however, brought a breakthrough: the company's turnover finally closed with PLN 36.89 million. It allowed to make PLN 6.4 million of EBITDA, PLN 3.95 million of operating profit and PLN 3.1 million of net profit.

The average annual revenue value of Polna in the six years' period was PLN 32.04 million, with a mean net profit of PLN 1.8 million. In the period, there was no occurrence of a net loss or a negative EBIT value. Obviously, this is very positive.
At the end of the last year, fixed assets amounted to PLN 23.3 million, and current assets, to PLN 16.44 million. Z.A. Polna is one of the smaller electrical engineering companies but is doing really well. What is interesting, it has considerable cash reserves: in 2011, cash accounted for 197 per cent of the current debt, the next year, 51 per cent, and in 2013, 200 per cent. These are very good levels, maybe even "too good" (after all, maintaining such ratios is not necessary).

The company's equity many times exceeded the amount of liabilities, and current assets were considerably higher than current debts (in the last year, they exceeded debt 4.4 times). The golden balance sheet rule was maintained. Good values of these ratios had also been observed in the previous years.

In the last year, the company improved its efficiency, among others by reducing production costs – material and power consumption was reduced in relation to turnover; stocks were also decreased. Consequently, profitability ratios improved, beginning with the return on sales.

For Polna, export is becoming more and more significant. In the last year, it even accounted for 48 per cent of sales revenues. Some new products were added to the assortment, e.g. valves with ceramic elements and two-way valves.
It must be remembered that generally Polna mainly manufactures control valves, pneumatic actuators and some other automatic control devices. The company has been on the market for over 90 years.

The chart showing price indices of shares proves that the growth tendency has been retained. It happened only a few days ago, so there is a chance for further growth. Support levels are approximately PLN 19.50 and 17.55, while resistance levels are PLN 22 and 24. It should be remembered that currently the price index of Polna's shares exceeds PLN 20, and a year ago, it was less than PLN 13, so the progress has been considerable."