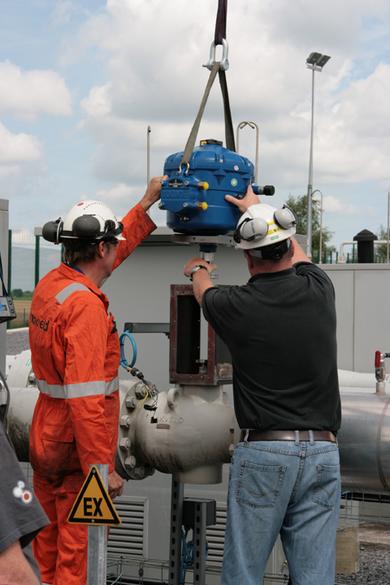 Fluxys is the independent operator of the natural gas storage and transmission system in Belgium, supplying domestic and industrial consumers throughout the country. Because the natural gas can come from different sources and the composition of each source varies, the quality of the gas is closely monitored for calorific value and density at blending stations. The gas blending process is therefore a critical part of the transmission and storage structure, impacting on product quality, environmental regulations and profitability.

Wishing to improve the blending process, Fluxys identified valve actuation as a key area. Improving process valve response times whilst reducing dead-time and overshoot would increase control efficiency and eliminate potential cycling and variability problems. If an electrical solution could also be found, it would reduce operating costs and improve environmental performance by eliminating the requirement to waste gas through venting to air as determined by existing equipment.

Prodim, Rotork’s agent in Belgium, proposed the use of the CVL-5000 electric control valve actuator as an alternative to the existing actuator on a blending flow control valve in a trial at the Fluxys booster station at Le Roeuix. As well as simplified, all-electric operation with low power consumption, the CVL-5000 delivers a high thrust linear output performance that suits the heavy duty demands of the large control valves used in the application, combined with a programmable integral failsafe capability.

Engineers from Fluxys, Rotork and Mokveld removed the existing actuator, fitted an ATEX certified explosionproof CVL-5000, re-connected the control signal and carried out a series of tests that demonstrated improved response times, accurate valve positioning, low running costs and fail-to-position operation on loss of mains supply. As a result, Fluxys has decided to adopt the CVL-5000 as the standard actuator for its gas blending plants; over time, existing valves will be retrofitted whilst new valves will have the actuators factory fitted. It is estimated that the improved performance achieved by each valve installation can be accompanied by an annual saving of up to 5000 euros in operating costs per unit.