THINK' PC PROGETTI s.r.l., production centre for industrial valve test benches, was founded in 2001, it’s now close for over 20th year of activity. The experience gained in the field of its founder and current president Dr. Paolo Clerici, has allowed its rapid development serving most of the national manufacturers of valves the Oil & GAS and Water-works sector.

It is precisely in the early years that a constant evolution in terms of technology, turnover, know-how, competence and quality allowed think’ PC PROGETTI to expand and relocate its operational headquarters from Grandate to Rovellasca in 2007 in a larger operating space that has guaranteed the production capacity of larger test benches.

Initially, the sales network turned to the national market and then expanded to Europe. The first representative agencies were set up in Spain, Portugal, France, and Belgium. The impulse given by these new markets allowed to expand and improve construction technologies, making our product flexible to any testing requirement.

The consolidation of its presence at an European level allowed think’ PC Progetti to expand also worldwide; there are currently representative agencies in USA, Russia, India, Vietnam, Taiwan and Thailand. Our commercial network is constantly evolving and it is a source of great satisfaction.

In 2010, the company obtained its first ISO 9001 certification, an evidence of the level of quality achieved.

In view of the ever-increasing demands, think’ PC Progetti in 2012 included another workshop, and the company is now located in a production area of 2400mq of which 1600mq used as laboratories and offices.

Innovation, sophistication and continuous updating of materials and techniques laid the basis for a constant development of a wide range of products, such as the creation of tilting or cryogenic benches and to find solutions focusing on new markets and customer satisfaction.

The company operates in the world market for the design and manufacture of test benches for valves and actuators.

All this has made today think’ PC PROGETTI the first Italian company in its sector, well known worldwide. 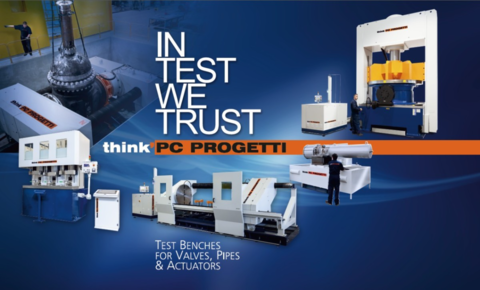