Energy transition as an innovation programme - also for the fittings industry 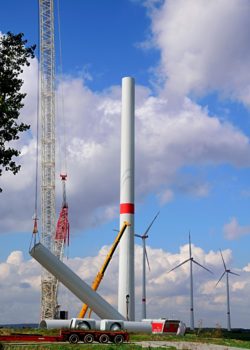 Wind energy is on a clear growth path. Photo: Pixabay

The pace of energy transition shall be significantly increased - because climate change requires swift solutions. With the increasing shift away from fossil fuels, renewable energies are now pushing all the more into focus. Global figures confirm the upward trend, especially in wind power and photovoltaics. To be able for the development to succeed, solutions and components from the valve industry are required.

According to the Global Wind Report 2022 of the Global Wind Energy Council (GWEC), global wind power capacity increased by 93.6 gigawatts in 2021 to a cumulative total capacity of 837 gigawatts, "which corresponds to a growth of twelve percent compared to the previous year." Even so: Although the wind energy is on a positive growth path, “it is not growing nearly rapidly or far enough to achieve a safe and resilient global energy transition.” At current installation rates, GWEC Market Intelligence forecasts that by 2030 less than two-thirds of the wind energy capacity required for a 1.5°C and net-zero path will be available, “which means we will miss our climate targets.”

The global photovoltaic market also grew significantly last year, according to preliminary data from the International Energy Agency (IEA). According to the PVPS (Photovoltaic Power Systems) photovoltaic programme of the IEA, photovoltaic systems with an output of approximately 175 gigawatts were installed in 2021. This means that the photovoltaic power installed worldwide at the end of 2021 will have a cumulative total capacity of around 942 gigawatts – and is likely to have exceeded 1,000 gigawatts by now. Photovoltaics currently covers around five percent of the world's electricity demand.

Energy-efficient technology in demand
According to experts, in order to achieve the climate targets, the growth rates of renewable energies must once again increase significantly. Regardless of the level of increase, it is however clear that "the energy transition was and is a huge innovation programme for the industry," as explains Dr. Simone Peter, President of the German Renewable Energy Association (BEE). By 2050, up to 800,000 additional jobs could be created in Germany alone. The global potential of an energy transition is also enormous. New opportunities are developing for the marketing of energy-efficient, modern technology and the acceleration of the urgently needed digitalisation of the energy system.

Suppliers of individual industrial components have good prospects as they face a global growth market. Perspectives that OHL Gutermuth has been successfully using for many years. The company supplied special valves for the construction of the largest Concentrated Solar Power plant in Dubai. The Sheikh Mohammed Bin Rashid Solar Park is the largest CSP facility in the world with a capacity of 1,100 MW of energy. An order as many for OHL Gutermuth. "We have already delivered our special valves to Spain, China, North and South Africa, the United Arab Emirates and North and Central America," emphasizes Managing Director Wolfgang Röhrig.

Projects are shooting out of the ground
Numerous orders in the wind power industry are also in the pipeline. For the Sunrise Wind offshore wind project east of Long Island's Montauk Point in the State of New York, MRC Global Norway AS supplies the entire range of valves, instruments, pipelines and hoses. The company was commissioned by Aker Solutions, which is responsible for the offshore platform.

The Sunrise Wind Project will be the largest offshore wind farm by power generation capacity in the state of New York. The 924 MW project, located over 30 miles off the coast east of Long Island's Montauk Point, will be sufficient to power nearly 600,000 households and provide 100% renewable energy to realize New York's vision of becoming a leader in clean energy. The Sunrise Wind Project is a joint venture between Ørsted and Eversource.

The number of wind power projects is increasing worldwide. This can also be seen in the construction of wind farms, for example by the Nordex Group. On behalf of Statkraft, the largest producer of renewable energies in Europe, 19 plants are being built in Chile. Nordex Group also supplies 41 turbines for a wind farm in the USA. For example, Vattenfall is building the Norfolk Boreas offshore wind farm.

AUMA supplied actuators for the Qingshui Geothermal Power Plant in Taiwan, where the components have to withstand high temperatures, high humidity and corrosive atmospheres. Photo: AUMA

Using the Renewables Range
However, experts warn against using almost exclusively wind power and photovoltaics. For example, Dr. Simone Peter of the German Renewable Energy Association (Bundesverband Erneuerbare Energien) calls for other options such as bioenergy, hydropower, geothermal energy, storage and green hydrogen to be "finally fully exploited". The likelihood that these markets will at least partly make a significant contribution to a global energy transition is high.

There are already numerous projects. The largest geothermal heating plant in the EU is being built in Aarhus, Denmark. It will have a capacity of 110 MW, which corresponds to 20 percent of Aarhus' district heating needs. Annual CO₂ emissions are expected to be reduced by up to 165,000 tonnes.

A large-scale geothermal power plant has already been built in Taiwan. 40 AUMA actuators are in use at the Qingshui plant. AUMA has supplied 32 rotary drives SA 07.6 and SA 10.2 with actuator control AC 01.2 and gears GS to the power plant. A further eight SEVEN HiMod actuators are used for positioning control valves. All components in the system, including the electric actuators, are exposed to an extremely corrosive atmosphere with high temperatures, high humidity and aggressive gases. As in other areas of renewable energies, quality is a must in order to survive on the market.

Fittings for the energy transition
Germany is a very important biomass market for ARCA controllers. "Many standards for the attached water-steam condensate circuit have been and are being shaped in Germany," explains Johannes Fliegen, Managing Director of ARCA REGLER. With its components, the company feels well prepared for the challenges of biomass. "We have structured our range of valves in kits in such a way that we can put together millions of variants," explains Fliegen. From this very pronounced modular system, the company can operate any required application.

Renewable energies have yet another great potential for the future – for the climate and the economies. Dr. Simone Peter of the German association BEE therefore demands that the "farewell of fossil fuels should take place more quickly". A development that the valve industry is already adapting to today. The components are available – and could help to speed up the energy transition immediately.

From 29 November to 1 December 2022, the key players of the industrial valves sector will present themselves at VALVE WORLD EXPO with an accompanying conference in Düsseldorf. About 400 experts from 29 countries will use the Düsseldorf Fairgrounds as an international fittings summit to present their innovations and discuss current research and production processes.