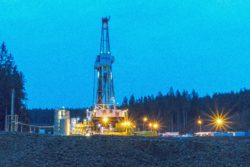 Geothermal power is a source with practically endless potential.

Valves used in the geothermal sector need to be as tough as it gets. In the past, many pumps failed to cope with the hostile environment of this form of energy production, causing tremendous costs. Today, the sector is transforming. Special valves are being produced in series that can make use of geothermal heat.

All signs point towards global growth for geothermal energy – and on a major scale. Many countries will “being to make use of geothermal energy, others will continue to expand this form of energy,” predicts the Bundesverband Geothermie (BVG), the German Geothermal Association.

Constant availability
Demand for geothermal energy is growing in Germany, due to the energy transition. Geothermal energy is supposed to augment the mix of renewable forms of energy, generated by solar and wind power. Germany has already embarked on its path – 30 plants are currently in planning, two are being constructed and four will serve as research projects. They will expand on the 33 plants already in operation. Geothermal energy has a major advantage compared to other forms of renewable energy, namely “that it is constantly available, regardless of weather conditions or the time of day or year,” as the Munich City Utilities (SWM) state.

The time has thus come for change, as all sectors connected to geothermal energy recognised several years ago. In the past, operators of geothermal power plants were forced to use pumps for oil and gas industries, which weren’t designed to meet the requirements of geothermal energy. “Compared to the crude oil sector, pumps used for geothermal energy have to date been not very efficient, and show signs of wear at an early stage,” reports BINE Information Service, published by the FIZ Karlsruhe – Leibniz Institute for Information Infrastructure GmbH, which is in parts funded by Germany’s Federal Ministry for Economic Affairs and Energy (BMWi). There were no special pumps available for geothermal applications.

Valves prone to failure
As such, pumps were highly prone to failure, some pumps already broke down after just a couple of months. In the Unterhaching geothermal power plant, ten ESP pumps (electro-submersible pump) had “given out”, as VDI Nachrichten, the news service of the The Association of German Engineers (VDI), reported several years ago. More often than enough, broken frequency converters, bearings, damaged bearings or hot windings were to blame. “These failures really cost money”. Around one million euro need to be invested, per pump.

Not only the technology, but also the dimensions make pumps for geothermal applications a very expensive component. The rather new pump in the Freiham geothermal plant is 45 metres long, and has a total weight of 45 tons, including the rod. A heavy-duty crane was needed to lower it 600 metres below the surface. Here, the pump conveys thermal water with a temperature of approximately 90° Celsius from a depth of 2,500 metres to the surface.

Solutions need to be found for special pumps in geothermal applications – numerous manufacturers are working vigorously on hard-wearing components. Baker Hughes is one such example. The manufacturer of special geothermal pumps constructed a high-temperature test loop on its company site, in order to test entire pump systems under real-life conditions. “Field tests have yielded further insights into structural weak points in the aggregates used to date,” reports BINE in its Projektinfo 3/2016. Scientists had salvaged broken pumps from German geothermal plants, taken them apart and analysed the causes of defect. “On the basis of this data, they then developed modified prototypes which promise significantly higher efficiency and a longer service life”. Here, they concentrated on the conditions found in hydrothermal plants in South Germany, where thermal water reaches temperatures between 120 and 140° C, and is highly calciferous. Baker Hughes collaborated with the geothermal plants in Oberhaching, Dürrnhaar, Sauerlach, Grünwald and most of all Unterhaching for this task, reports BINE.

Temperature and pressure fluctuations
With hardly any lubricant properties and containing dissolved lime, the thermal water can have grave consequences for components. The limestone “is then deposited on all components, particularly the hotter bearings. These deposits prevent lubrication and cooling of the bearings, which then leads to overheating and destruction of the pump shaft,” explains BINE. To make things worse, a layer of limescale acts as insulation, preventing heat dissipation from the motor.

“The high absolute water temperatures and the cyclical temperature and pressure fluctuations which arise when the plant is at a standstill or operates at a reduced capacity are a source of stress for pump bearings, seals and motor insulation. “Thermal water furthermore contains dissolved gases. During the course of time, these diffuse into the oil with which the motor is filled. When a pressure drop occurs, the volume of the gases increases and pushes the oil out of the motor”.

Redesigned bearings structure
In general, the pump rates in geothermal plants vary – depending on the current heat demands of the plant and heat grid. “As a result, the pumps are frequently subject to start and stop procedures or phases with reduced capacity,” explains BINE. As such, the resulting variation of torque, motor temperature and pressure cause extra stress. In order to monitor pumps deep below the surface and initiate maintenance early enough, measurement sensors are required that can withstand high temperatures, and can transfer a large number of variables with a high data transfer rate.

In the end, the outcome was positive. The motor’s bearings structure was entirely redesigned – and there have been no more failures. “A pump with optimised bearings has been operating in a southern German plant for over 8 months without any failure occurring. The weak points found to date in the insulation have been rectified,” states the news service.

Additional improvements were also made in the form of a new medium voltage frequency converter for a higher operating voltage, improved design of the operating parameters and a prognostic concept for preventive maintenance and repair works, adds BINE. Development of core components continued to achieve series production in 2017.

Reinjection, condensate and cooling water pumps
KSB also sees geothermal power as a source with “practically endless potential.” Needless to say, there is also lots of potential for pumps. As the company knows to report, numerous valve types are used in geothermal plants, where geothermal water can reach temperatures of up to 250° Celsius. Pumps include reinjection pumps, “which return the cooled geothermal water back underground,” condensate pumps, “built from materials able to withstand the mineral-rich geothermal water,” as well as cooling water pumps, “that have already proven their worth in many conventional power plants”.

A variety of pumps is also required for binary geothermal plants with water temperatures of up to 180 °C. Such plants transfer heat to a second cycle, either a so-called organic rankine cycle (ORC), or a Kalina cycle. The plant uses media which turn to steam and drive a turbine, explains the pump manufacturer.

Pumps for binary cycle geothermal plants
“Special feed pumps are used to circulate fluids such as isobutane, isopentenyl, or water-ammonia mixes in this cycle,” states KSB. Circulating pumps can use residual heat for district heating, whereas reinjection pumps feed the cooled thermal water back below the ground. The second cycle isn’t needed if a heat exchanger is used to directly pump heat into a district heating grid, or is used in industrial processes.

Such pumps are necessary to enable the energy transformation also in the heat market. The Munich City Utilities (SWM) are highly engaged in the heat market, and are developing a vision for district heating: “By 2040, Munich is to become the first major city in Germany where district heat will be produced to 100% from renewable sources of energy. Geothermal heat will contribute significantly to eco-heat,” underscores SWM.

Munich relies on geothermal energy
SWM plans to make a long-term switch to renewables for district heating. The public utilities company aims to make “further substantial improvements in the already excellent climate and resource track record of district heating. Due to the unique nature of Munich‘s location and that of the region, geothermal energy will play a key role in this context: there is virtually no other region in Germany where the geological conditions are as favourable as they are here“.

Optimal conditions for the South German metropolis: “Munich is located right on top of a huge reservoir of this natural energy source”. At a depth of 2,000 to over 3,000 metres, water temperatures reach from 80° to over 100° Celsius. Heat from these geothermal water sources are ideal for heating. To benefit from this source, hot water is pumped to the surface and channelled through heat exchangers, which extract the heat from the thermal water. The cooled water is then fed back into the subterranean reservoir. “The geothermal power cycle thus does not impact on the eco-system,” states SWM.

Holzkirchen plant online in 2019
Munich has made extensive plans, and will implement them in the next few years. A further geothermal plant will be constructed on the site of the heating and power plant “HKW Süd”. It will go online already at the end of 2019. SWM expects the thermal water to have temperatures above 95°C. The plant is at the intersection of three grids: up to 50 megawatts could be fed into the grids inner-city, Sendling and Perlach. SWM plans to construct three additional geothermal plants by 2025.

In Holzkirchen, situated in the Bavarian Molasse Base, a fifth ORC (Organic Rankine Cycle) is being planned. The electric capacity will be 3.4 MW, and be utilised as a power source especially during summer. In winter, the heat will in turn be used for district heating. The Holzkirchen geothermal power plant is scheduled to go online in the first quarter of 2019.

High discovery rates
Daldrup & Söhne, a company specialising in drilling and geothermal exploration, has paved the way for utilising geothermal heat in the Dutch drilling project Nature's Heat. Drilling confirmed a capacity of at least 110 litres a second, and a thermal water temperature of ca. 86° Celsius. As such, the “value is well above the projected average value,” reports the company. The future operator will be able to utilise 20 MW thermal power, instead of previously calculated 12 megawatts power for heating greenhouses. Natural gas will be extracted as a by-product in parallel, with around 1.2 times the volume. The gas will be separated and be used to produce electricity by a third party. Thanks to the specific discoveries, the entire project is viewed as being efficient above average.

Geothermal energy has long left the starting block. Even though, this type of energy still remains at the very beginning of its potential, while making itself warmly recommended as a renewable source of energy. The more reliable pumps will become as an essential and expensive component, the more attractive geothermal power will become. A further, important piece of the mosaic, without a doubt.

All signs point towards global growth for geothermal energy – and on a major scale.