Operation Save the Environment 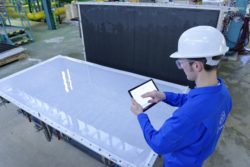 Thyssenkrupp has expanded its manufacturing capacities for water electrolysis to a gigawatt scale. Photo: thyssenkrupp

The energy market is facing a major transition as hydrogen will have a significant impact on the fields of electricity, heat and mobility. Hydrogen could also significantly reduce CO₂ emissions in processes of the chemical and steel industries, as well as in refineries. Sophisticated valves are needed to cope with the specific challenges of this medium. The valve industry is already on course to handle this – and the market seems to be booming.

Some states are already setting the course for the use of hydrogen. Germany, for example, has already recognised its potential and formulated the National Hydrogen Strategy about two years ago, providing also subsidies. These can also contribute to environmental protection. “Flexible energy carriers are indispensable for the energy transition and open up new markets for German companies”, explains the German Ministry of Education and Research. In taking this step, Germany is pursuing a systematic approach thinking about production, transport, storage, distribution and use of hydrogen – including an international dimension.

Power-to-gas plants are needed to generate green hydrogen: In these plants, wind and solar energy are used to produce hydrogen via electrolysis from electricity and water. Power-to-gas plants are already in operation in Germany, as well as in Scandinavia and other European countries such as Switzerland, Austria, France, Italy and Hungary. On a global scale, these plants are used in China, Canada and Argentina, as well as in other countries.

A demanding medium
The process is particularly challenging as electrolysis produces not only hydrogen, but also oxygen. Both are very demanding media, with completely different requirements for corresponding valves and their materials”, Hartmann Valves explains. For hydrogen valves used in power-to-gas plants, the requirements are comparable to other gas applications.

The right choice of materials is crucial, in particular to avoid for example hydrogen embrittlement. Design-engineering measures are also crucial in order to guarantee the tightness of the valves against the small-molecule hydrogen in the long term. For this reason, Hartmann Valves offers gas-tight metal-seated ball valves with long service lives, which, if required, have also multiple barriers in pressure direction to further increase safety in the plant. For absolute certainty and security, material suitability tests and hydrogen emission tests are essential. “These provide the plant operator with the additional security of being able to predict actual emissions regarding the hydrogen medium that will be used later.” 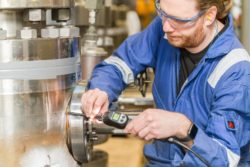 A pressure test with hydrogen shows whether the limit values are complied with and fugitive emissions are minimised. Photo: Hartmann Valves

Hydrogen can be stored in caverns that are hermetically sealed against the medium. Wellheads are used at the interface between aboveground plant facilities and underground storage, Hartmann Valves explains. In addition to wellheads, ball valves are used for pipelines and compressor stations.

Avoiding explosive concentration
Also the Waldemar Pruss Armaturenfabrik fully focuses on dealing with the challenges connected to hydrogen valves. A particular risk for highly loaded pressure-bearing components is ‘hydrogen embrittlement’; a material fatigue caused by the penetration of hydrogen into the metal lattice, which leads to the formation of cracks. The company emphasises that this is “a risk to be taken seriously”. Hydrogen is also the chemical element with the lowest density and diffuses comparatively easily through materials. Pruss says that “this requires special solutions for spindle and housing seals”.

Pruss advises particular caution because hydrogen is both odourless and tasteless and, depending on the concentration, can react explosively with the ambient air. “When selecting materials, we therefore take great care to check their suitability for use in terms of hardness values, explosive decompression and ductility”, the company explains.

Round sealing seats
In order to enable absolute tightness, müller quadax works with the 4-fold eccentric construction principle for its valves. The butterfly valves have a round sealing seat with a uniform wall thickness all around. “The design differs significantly from the common triple eccentric designs which have an elliptical sealing seat”, the company explains. Material expansions have a homogeneous effect on the entire sealing surface due to high temperature fluctuations “and thus ensure optimum sealing tightness”, the company continues. In addition, the Quadax® H2 valve is equipped with a special sealing ring made of a dedicated material that “functions perfectly even at these extremely low temperatures”.

Demanding technical challenges
The technical requirements for hydrogen filling stations are higher than for conventional ones, emphasises Herose: At these stations, the gas is stored in low-pressure storage tanks at about 20 bar. In car fuel tanks, however, the hydrogen must be compressed considerably more because of the necessary energy density. “Compressors first compress the gas to 1000 bar and then store it temporarily in high-pressure tanks. To prevent the gas from heating up too much during refuelling, it passes through a pre-cooler”, the company explains. The refuelling process is controlled electronically, and the pressure in the tank is regulated at 700 bar. “If the pressure drops unexpectedly, the safety valve opens and allows the excess pressure to escape unhindered into the atmosphere.” As hydrogen is thirteen times lighter than air, it escapes upwards and is not dangerous. Valves with highest safety standards are required for the passage from petrol station storage tanks to car fuel tanks.

And how might hydrogen use look in the future? In Fraunhofer IFF’s view, “systemically integrated hydrogen production” is a valuable concept. Not only the hydrogen produced during electrolysis would be used, but also oxygen; i.e. for welding processes or for ozonation of sewage treatment plants. “Problematic micropollutants such as pharmaceuticals, pesticides or cosmetics can be removed from wastewater by adding ozone”, Fraunhofer IFF explains. Another possible use is in agriculture, where the oxygen could be used for desulphurisation of biogas plants. These are more uses that show further, promising prospects.