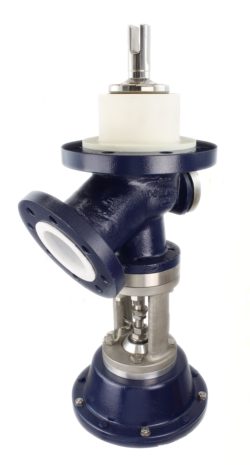 Even though they appear quite twinkle-toed, they in fact are heavyweights due to their increasing role in plant engineering. Valves made from plastic meanwhile are part of the product range. The reason is simple enough: they are light and don’t take up too much space. As one can imagine, plastic valves face a bright future.

Valves don’t necessarily need to be made from, for example, stainless steel, or grey cast iron. Plastic valves are used in numerous areas to convey fluids through pipes, and they need not shy away from uncomfortable environments. “Plastic valves have a lot of advantages, especially in areas where aggressive media are used,“ emphasises Uwe Schmezer, head of product and application management, Gemue. An important advantage is the material’s low weight.

Wetted parts made from plastic
Diaphragm valves are used quite often. They are appreciated for their ability to accurately regulate volume flows, and at the same time they are easy to automate. Even better, they can be used with neutral and aggressive media in a liquid or gaseous state. They are therefore attractive for makers of plastic valves. “All wetted parts of these valves are made from high quality plastics and thus have high chemical resistance,“ reports Schmezer about Gemue’s valves.

The membranes of the company are made from chemically modified, second-generation PTFE. Chemical resistance is very high, according to Gemue the material PTFE wears out significantly slower than a soft elastomer under steam conditions.

Suited for extreme requirements
Plastic and ball valves can also be a winning match. Here, the wetted parts, as well as the actuator housing, are made from plastic. This makes them suitable for clean media, which can be aggressive or neutral, fluid or gaseous, without negatively impacting the physical and chemical properties of the respective housing and sealing material. A ball valve from Gemue has a maximum permissible operating temperature of 120 degrees Celsius, depending on operating pressure and body and diaphragm material.

Plastic valves thus certainly are usable in extreme environments, such as the chemical and pharmaceutical industry. Water treatment, environmental engineering, automobile industry and galvanisation are further areas of use. Sectors which have a great demand for components, especially in so-called emerging markets.

Water and chemical industries are attractive markets
As far as water supply is concerned, the situation is dramatic for the world’s population. 1.2 billion people don’t have access to clean drinking water. A further matter of concern also is that there aren’t enough sanitary installations of adequate quality available for 2.6 billion people on the planet. On top of it all, global water consumption has tripled since 1950. The market volume for construction works, machines, plants and services in the water and wastewater treatment sector adds up to between 460 and 480 billion US dollars each year. Valves make up a certain portion of the investments.

In addition, last year investments in the chemical industry grew in nearly all EU 28 states. Expenditures which are worthwhile for the sector. Take Germany, for instance: the German chemical industry association (VCI) expects growing demand for chemicals produced by the German chemical industry. Especially Asia and Latin America are boosting demand. According to the study “The German Chemical Industry 2030“ published by research institute Prognos in cooperation with the VCI, exports of chemical products could grow by 40 percent until 2030. A development valve manufacturers in general stand to benefit from, as well as makers of plastic valves.

Application determines choice
The pharmaceutical industry also offers good prospects. According to „Pharmafakten“, an initiative of pharmaceutical companies in Germany, the sector is experiencing continuous growth. “Since 1992 global turnover of pharmaceutical products has increased by more than quadrupled. The main reason are more and more new innovations, which make the treatment of previously untreatable possible, or improves therapy.“ Once again, this is good news for the valve sector.

SchuF, for instance, has created special solutions for the pharmaceutical and fine chemicals industries. Valves manufactured by the company are indeed made from metal, but lined with PTFE or PFA on the inside. Mainly bottom outlet disc valves are used. “Valves need to resist higher pressures – therefore metal bodies are necessary – and have to be easy to clean on the inside, making plastic lining suitable,“ explains sales director David Donne, SchuF.

As such, manufacturing valves lined with PTFE or PFA is costlier than a standard valve made from metal. “Lining valves is an additional manufacturing step when making valve bodies,“ adds David Donne.

Even though the pharmaceutical and fine chemicals industries traditionally tend to use enamelled valves, especially as the reactors have an enamel coating, “we have experienced a moderate increase for plastic lined valves.“

A trend is the demand for additional functions, “for instance the integration of process analytical technology (PAT), which can be integrated into valves with either plastic or enamel coating,“ reports the sales director of SchuF.

Acceptance is increasing
PVC (polyvinyl chloride), PP (polypropylene) and PVDF (polyvinylidene fluoride) are amongst the most commonly used plastics for valves. PVC, one of the oldest and most frequently used plastics, is resistant against chemicals and does not react to humidity. Its thermal resistance, however, is not the best, and its impact strength is low. In turn, the thermal resistance of PP is good, as well as its chemical and mechanical properties. PVDF is very tough and highly resistant against especially corrosive chemicals – the plastic is also convincing thanks to its very smooth surface.

The advantageous properties have seen the acceptance of plastics as a material for valves rise over the years. A widespread preconception has thus also been proven wrong, namely that this material wouldn’t find any general application in valves, for instance in ball and diaphragm valves. As a matter of fact, plastic valves are being used in various sectors.

Plastic multiport valve blocks are a trend
As plastic valves also have to cope with critical media and environments, „Atmosphères Explosibles”, they have to be made in line with the ATEX directives, which harmonise various requirements within the EU. Since April 2016 a new ATEX directive is in effect: 2014/34/EU. Since 20. April 2016, only products that fulfil it can be sold and distributed with the EC declaration of conformity. Using plastic valves with highly flammable mixed media, must fulfil strict requirements.

Trends arise from the numerous possibilities offered by plastic valves. One such trend is the rise of multiport valve blocks made from plastic. They are light, don’t require much space, are quick to assemble and are multifunctional. „These requirements play an ever increasing role for plant components,“ explains Schmezer. Complicated dosing of fluids “usually takes place today over lots of single valves.“ These are connected over as much fittings and pipes with each other. A lot of space, however, is required, and assembly is laborious due to the high number of single parts. “At the same time each installation site and pipe connection is a potential leakage point, increasing the security risk. Compact multiport valve blocks made from plastic offer themselves as ideal components.“ They are space-saving and can assume various functions. Multiport valve blocks made from plastic – a product offering opportunity.

A promising and exciting future
Experts see great potential for plastic valves, also thanks to the material being developed further. As this progresses, one can expect a lot from the material. Needless to say, this makes plastic valves an exciting and promising topic for the future.

Innovations on valves will be presented at Valve World Expo Düsseldorf from November, 27 to 29, 2018 at Düsseldorf Fairgrounds.