The music is playing in China

Europe remains reticent about nuclear technology, whilst in Asia numerous new nuclear reactors are being build. The bottom line is that the nuclear reactor business remains lucrative for valve manufacturers.

In June 2018 the nuclear power plant Taishan 1 in China was connected to the power grid for the first time.
Source: EDF

Ten years ago, it would have been perfectly correct to speak of a global boom in nuclear energy. But since the Fukushima major disaster at the beginning of the decade and the rise in renewable energy in recent years, the tide has been turning, especially in Europe. The use of atomic energy also divides opinion. So now it is more of a regional speciality – and how!

It is unloved in Germany and Switzerland, in France it is declining, but gladly accepted worldwide. So atomic energy is complicated – one way or another – it doesn’t seem to leave anyone cold. Even some experts are not sure whether the construction of new nuclear facilities will prevail in the long run – with regard to the high costs of nuclear technology and cheaper alternatives with renewable energies. The fact is that, at least for the foreseeable future, above all in Asia, nuclear power plants will be on the rise.

Increase in nuclear energy
The increase in nuclear energy is supported by figures from the International Atomic Energy Agency (IAEA). According to these there are currently around 450 nuclear power plants in operation in 31 countries. They produce a little more than 380 Gigawatts annually. But it won’t stay that way. The IAEA expects an increase in capacity of more than 1.9 per cent by 2030. And if the global economy continues to grow as it is currently, an increase to almost 600 GW is conceivable.

The reason for the growth is the thirst for energy of the emerging economies. This is why China is planning 40 new nuclear power plants, Russia 25 and India almost 20. Europe is reticent about building new facilities. However, Poland will soon start using nuclear technology in several power plants. According to the World Nuclear Association, 164 nuclear power plants are already under construction worldwide and another 350 are planned. In addition, some countries will have longer-term extensions.

China as an important market
“The music is playing loud and clear in China,” emphasizes Dr. Tomas Hahn, member of Framatome GmbH’s management committee and responsible for clients, politics and innovation. “For example, we brought an EPR reactor with a Framatome design onto the grid for the first time." Overall, the focus of new construction activities is in China. So, this
market is, of course, interesting for Framatome.

“But we should not only look at new-build areas. The service market is very important too,” according to Hahn. And here all countries are interesting for nuclear power plant operation. For Framatome in Germany, these include Switzerland, Sweden, the Netherlands, Finland, Hungary and Brazil and Argentina, as well as many other countries.

From Schroeder Valves’ point of view the issue of nuclear maintenance becomes more relevant. “The valves used are inspected and maintained at regular intervals during review times,” says Axel Mücher, Managing Partner of Schroeder Valves. Here usually only worn parts would be replaced and new ones obtained from the manufacturer. “The general service life of valves is 20 to 30 years and does not differ significantly from non-nuclear facilities.”

20,000 valves for each nuclear power plant
The German phase-out in 2011 had led to a drop in orders at Framatome, as the affected plants were customers of the company. But the decline in orders is gradual. Because, in a nuclear power plant, safety requirements remain high even after a shutdown. “In addition, we were able to offer preparatory services for dismantling, such as chemical decontamination of the primary circuit. But that does not change the fact that we will be gradually losing the German market in coming years. Because of this we have been driving exports since 2011,” says Hahn. So, since Fukushima. Fortunately, this works well because nuclear skills from Germany are still recognized and in demand worldwide. “This allowed us to stabilize sales at around 750 million Euros.

Suppliers of valves for nuclear reactors, of course, are following developments with eagle eyes, as nuclear plants basically have a great need for valves. “In one nuclear power plant there are around 20,000 valves, of which around a third are large valves, so in practically every area of the plant,” explains Hahn. Different types are used, for example those with electric or magnetic drives, manual drives or even passive constructions. In certain cases, these shut down independently, and perhaps permanently, should certain parameters such as temperature and pressure change. In this way they ensure that the media in the pressure-enclosing valve are held securely.

Safety valves are key
Naturally safety valves are of paramount importance. The demands on them are high, but they differ according to their purpose.  Many industrial facilities are subject to classic industry standards, which are also used in other power plants. Hahn: “For the entire primary circuit, but also for all safety-relevant functions, the requirements of the nuclear technology regulations apply, so the KTA in Germany or the ASME Direction III from the USA. Here there are precise specifications with regard to the material properties, calculation complexity or mode of operation. In addition, we have to provide numerous proofs in advance, to qualify the components for use in nuclear power plants”.

Framatome is involved in the construction of numerous nuclear plants. Including, in fact, facilities in Europe. In France and Finland for example. Above and beyond that there is a huge project in Great Britain, where two new plants are to be built at the Hinkley Point location. “We from Germany are involved in all these projects. We have an order backlog of around 2.5 billion Euros,” reckons Hahn.

With the help of the check valves this is to prevent: Rapid changes in mass flows in high-pressure lines that can cause pressure surges and forces that exceed the permissible limits of material strength. “Thus, the closing behaviour of check valves after a breakage in pressurized piping has special significance,” explains the company.

The Sempell design was developed to prevent pressure surges which can result from double pipe breaks in the feedwater pipes in the nuclear power plant. The damper check valves absorb pressure shocks that could cause other damage in the pipework. “As new nuclear power plants have to operate in a broad load range, the Sempell design also fulfils the demand for a stable, fully-open position – adjusted to the minimum load case. At the same time the valves are optimized with regard to pressure loss,” explains Sempell.

As proof that damped check valves are suitable as a safeguard against pipe breakage in feedwater systems, blowdown tests were carried out in the experimental power plant Kahl HDR with a DN 350 valve. In these tests the malfunction “double-ended pipeline breakage” was realistically reproduced.

A renaissance? Not yet
Even so: Although two new blocks are emerging at Hinkley in Great Britain, the idea of an atomic energy renaissance in Europe is far removed.  It is, as is often said, somewhat complicated. “The absence of broad and sustainable international consensus about the long-term use of nuclear technology and its low and unpredictable future social acceptance in individual markets considerably reduces its appeal,” remarks Axel Mücher, Executive Partner at Schroeder Valves. The company supplies pump protection valves for the nuclear market as special free-wheel check valves. These valves – on average eight per power plant – are used in various cooling and emergency feedwater systems in the plants.

A look behind the scenes shows that manufacturing the valves for the nuclear market is done through a certified quality system, “that is strictly monitored internally and externally by qualified personnel. Subcontractors who supply materials and services are also part of this quality system,” Mücher emphasizes. The regulations in force specify all the requisite quality measures, depending on the conditions of use and their safety relevance.

Involving local partners in China
“Implementation of the regulations begins straight away with the development, construction and calculation of the valves and with the choice of materials, all conforming to the regulations.” This compliance with the regulations is ensured with a preliminary check of the complete documentation by notified bodies. “Then the production process starts, with numerous interruptions due to compulsory production-related inspections that are carried out by qualified internal and external personnel,” explains Mücher. A final, appropriately monitored function and strength test by the experts concludes the production process.

But China has its own regulations. Involving local partners is playing an ever more important role, since value-creation, particularly with large-scale projects, should remain in-country. “So, our task is to buy in China, for China, but in doing so not compromise our quality and process requirements,” explains Dr. Tomas Hahn of Framatome GmbH.

Experience is appreciated
For example, Sempell landed a major order in China. The company supplied a total of 236 valves for the KKW Tianwan blocks 3 and 4. Blocks 3 and 4 are pressurized-water reactors VVER 1000/428M and were fitted out by the Russian company Atomstroyexport. The different shut-off valves and flaps are used in the emergency cooling system, and in the live steam and sprinkler systems. The order includes, for the high-pressure area, 84 GPS5 DN 300 sliders and 52 HKS5 DN 300 valves made of forged steel, and for the mid-pressure area another eight GPS5 DN 600 sliders, 68 GPS3 DN 300 sliders and 24 HKS5 DN 300 valves.

Velan is one of the valve manufacturers that serves the nuclear market on a large scale. A company that was supplying components to the sector in the early days of the nuclear industry in the 1950s. Velan supplies several hundred nuclear reactors worldwide. Persta Stahl-Armaturen has also been active in the nuclear field for a long time. The company has been providing valves like shut-off valves since the mid-1960s. The sensitive area of application requires "the highest safety standards and elaborate documentation," emphasizes Persta Stahl-Armaturen. Naturally users like to rely on the experience of such companies who have long been established in the nuclear power
business.

The future is open
Experience, that has been needed for a long time. How much – that is difficult to assess. Framatome, as a supplier of nuclear technology, naturally sees its future in an optimistic light. “The number of countries using nuclear power plants will increase, there will be more nuclear power plants worldwide than there are today. And Framatome keeps on collaborating on new construction projects, supplying servicing and modernization for commissioned facilities and supplying fuel elements,” says Dr. Tomas Hahn, member of Framatome GmbH’s management committee. But there are others who have doubts about competitiveness, safety and the nuclear waste disposal issue. As I said, the issue continues to divide thinking – but still holds great potential for valve manufacturers.

Innovatations in the fields of valves and pumps will be presented at VALVE WORLD EXPO, No 1 fair for industrial valves, from December, 1 to 3, 2020 in halls 1, 3 and 4 at Düsseldorf Fairgrounds. 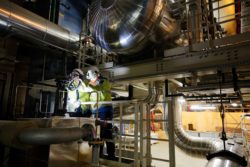 The new construction project Flamanville 3 in France: A worker closes a valve as part of testing Source: EDF/Morin Alexis